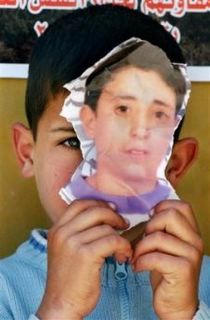 Jamal Jaber, seventeen. Jamal and his cousin Uday Mufeed were killed by war criminal IDF soldiers. The seventeen year old boys were protesting the apartheid wall going up in Beit Lakia. CNN will not mark these boys' deaths; CNN will show Jewish youths draped in the Israeli flag parading around Birkenau.